The natural cleavage exhibited by slate rock ensures that when it is split using appropriate tools, large flat sheets of rock can be obtained. So tough is the rock that these sheets may be split to between 12mm and 6mm without breaking up. A skillful cutter can cut across the cleavage to produce slates of the required sizes for roofing purposes. Traditionally these sizes are named as follows:

* sizes recorded in the Easdale journals.

While awaiting loading, cut slates were stacked according to size between a series of vertically placed slate slabs on the north side of Easdale harbour. These are still present in their original position.

As the shoreline was denuded to below sea level, it became increasingly difficult to keep out the water even at low tide. By building a system of walls and sluices the quarriers were able to control the flow of water and worked in relatively dry, safe conditions for a few hours every day. As the quarries fell further below sea level walls were built to keep out the sea at all times. One of these, 4m in height, stands on the seaward side of one of the largest quarries on the west side of the hill. The action of the sea is gradually reducing this wall to rubble but so well was it constructed that it has remained, although untended, since the quarries closed. Further evidence of masonry to maintain the rim of the quarries can be seen on the NE side of the Windmill Quarry.

Reinforcement using concrete was introduced late in the nineteenth century and can be seen in one quarry. This dates the quarry to about 1890 when McAlpine was introducing concrete for Civil Engineering works throughout Scotland.

After 1745 various forms of mechanisation were introduced both to remove water from the quarries and to transport the rock. The waste rock which constituted as much as sixty percent of the rock quarried, created its own problems of disposal. At first the spoil was spread over the surface of unquarried ground. Later as quarries became abandoned because the sea could no longer be excluded, the waste was shovelled into the disused pits. Occasionally a good use was found for the waste in producing causeways and embankments for access purposes and for infilling pitted ground to make space for building accommodation for the workers and their families.

This infilling process was responsible for joining Eilean na Beich (Isle of Birches) to the Isle if Seil and providing a suitable foundation for the houses in that village. The most unsatisfactory solution was to tip the spoil into the sea on the west side of the island. Embankments were built running outwards to the farthest points west, with railway track to carry the trolleys filled with waste.
The action of the tides has moved this material around the island to build up the mole of loose slate which forms a low beach of slate shingle facing the shoreline of Seil across Easdale Sound. This loose rock moves southwards along the Sound at every spring tide and during stormy weather, regularly blocking the entrance to Easdale harbour and necessitating dredging it at least once a year.

In the early days the women and children with creels upon their backs carried the made slates to the harbour for stacking. In the mid nineteenth century a system of railway lines made haulage possible. The trolleys were dragged at first by men and later by horses. According to eyewitness accounts small locomotives were used on these same tracks from 1860 onwards. These were housed in the coalree, one of only two industrial buildings still in use on the island.
Remains of the railway track, removed in recent times from other parts of the island for sale as scrap, can be seen embedded in the coalree floor. For certain tasks no suitable alternative was found for the horse, and a team of Clydesdales was kept on the island until the quarries closed down in 1911.

Slate rock was removed from the foreshore by inserting hardwood wedges in cracks at low tide. As the tide rose, the wedges swelled and the cracks widened. Skilful placement of the wedges meant that the rock would split into manageable blocks after a number of tides. Once broken out the block was hauled above high water mark for splitting and napping, trimming, into roofing slates. When seawater could no longer be used to break out the slate, gunpowder was introduced. Blasting was tricky because too much force would shatter the rock and render it useless for cutting.
Keeping gunpowder dry must have been a particular problem. There is evidence that both powder and fuses were kept in some cottages. A bag of live fuses which had remained undisturbed for seventy years, was unearthed from the loft of one of the cottages in 1980. An army bomb disposal squad was brought in to remove them and explode them in safety.

Men worked in teams of five or six; two quarriers, two splitters (nappers) and two labourers whose job it was to supply the nappers with rock and remove the finished slates and the spoil.

Those dressing the slate worked as close to the rock face as was practicable. They created for themselves rectangular pits in the ground, neatly reinforced with dry stone walling. Corner posts supported a canvas or corrugated iron roof which kept out the wind and rain while they worked. Many such pits can be seen in the proximity of the quarries.

In this crude shelter the men, often seated in the water which collected around them as they worked, split and shaped the slates throughout the hours of daylight. It is little wonder that the most prevalent diseases amongst the quarrymen were rheumatism and arthritis.

The men were paid by the thousand slates sold, the different trades attracting different wages with quarrymen being considered the most highly skilled. Generally the gangs were paid twice yearly and were obliged to run up a bill with the Company store meanwhile. A tally was kept of the number of slates made by the gang and of amounts owing at the store. These were literally recorded by writing on a slate. Hence the term … put it on the slate.

Casual workers were paid a daily rate and received their money whether or not the slate was sold. Although they received less money than the regular workers they were seen to have an advantage and this discrepancy in methods of payment was the subject of disputes recorded in the Company papers.

Each gang was allocated a section of the quarry in which to work. During the 1880s when the Easdale Slate Company was run by a consortium of Glasgow businessmen, lack of investment and poor overseeing by the manager, Mr McColl, led to the use of too many gangs operating at each new face. The groups of men got in each other’s way as they blasted and levered the rock from the quarry walls. Serious accidents were common, at least one proving fatal.

From the days of the Marble and Slate Company of Netherlorn, various methods of pumping the quarries were tried. One early experiment in this respect was the Newcomen’s Atmospheric Engine by means of which water could be lifted from a low to a higher level. In 1800 the Company introduced a windmill from East Anglia. This was set up in the most northerly of the quarries which to this day is known as the Windmill Quarry.

From time to time steam driven pumping gear was acquired locally from wrecked vessels. Naval equipment was of infinitely better quality than anything the Company could afford in the normal course of events. The remains of Currie’s Engine House, built following the great storm of 1881, can still be seen on the west side of the hill together with the boiler house which provided steam to work the equipment. Close by is a ruined forge.
When the large quarry at Ellenabeich was flooded, much valuable equipment was lost but Mr Wilson, the new manager, retrieved the large crane and several smaller winches and installed them on Easdale Island. Platforms built to hold this equipment can be found near all the quarries and the occasional rusty piece of iron sticking up out of the ground indicates the extent of the steam pipe system employed.

Since the quarries officially closed in 1911, attempts have been made on a very small scale to continue to win slate from Easdale Island. The material obtained has been used for monumental and craft purposes only.

Easdale is a Conservation Area and many of the houses are listed buildings. Roof repairs and extensions must now be carried out in slate or a suitable substitute (made from reconstituted slate dust). In recent times Easdale slates have been recovered from dismantled buildings in Glasgow and elsewhere to carry out repairs and renovations. Despite having been exposed to the polluting atmosphere of the city for more than a hundred years, these recycled Easdale slates have been found to be in good condition and are expected to continue to give unlimited service. 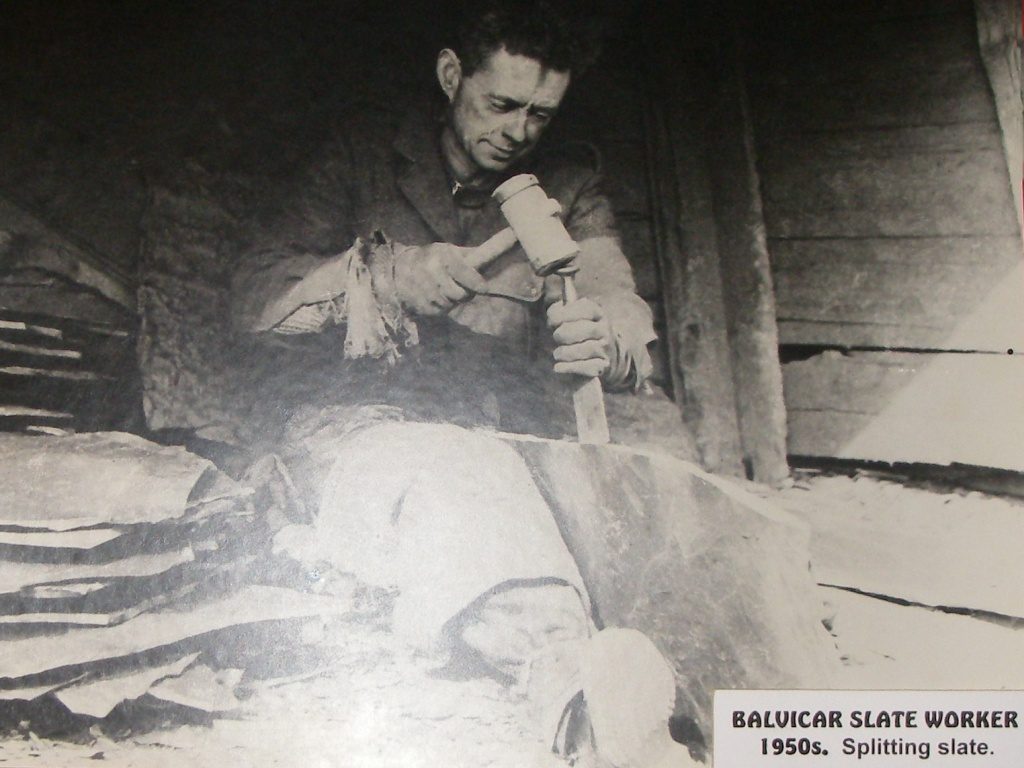 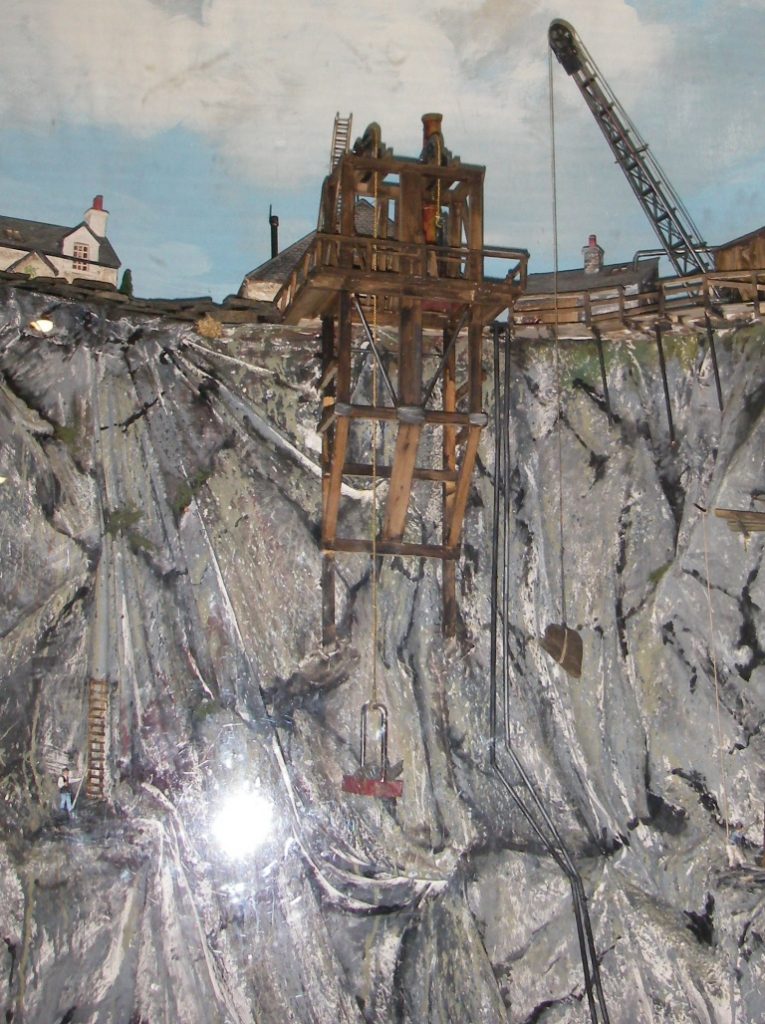 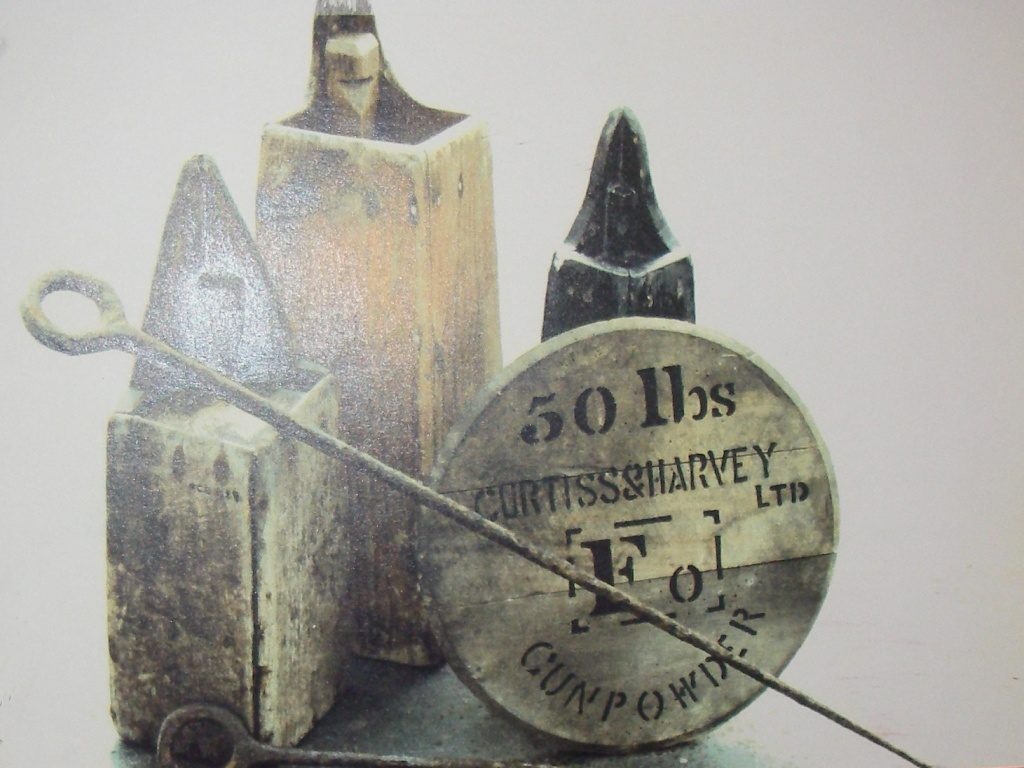 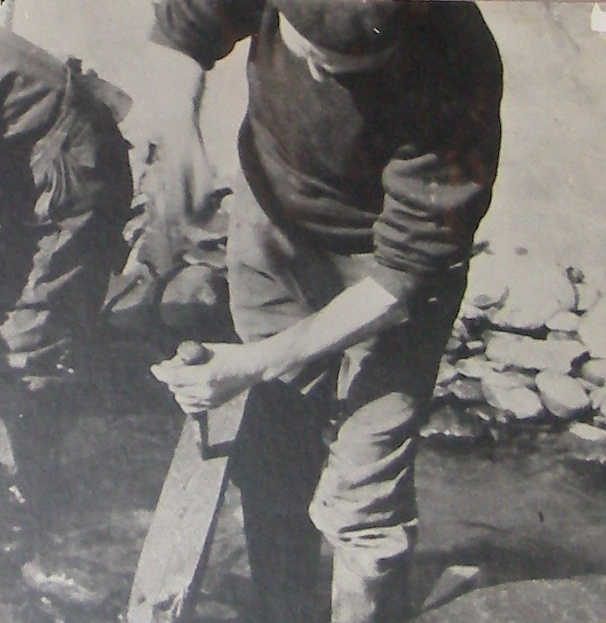 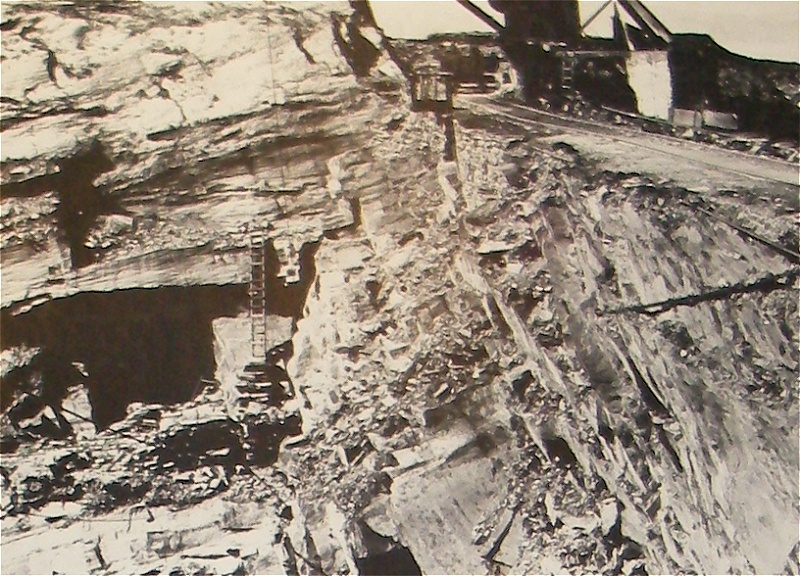 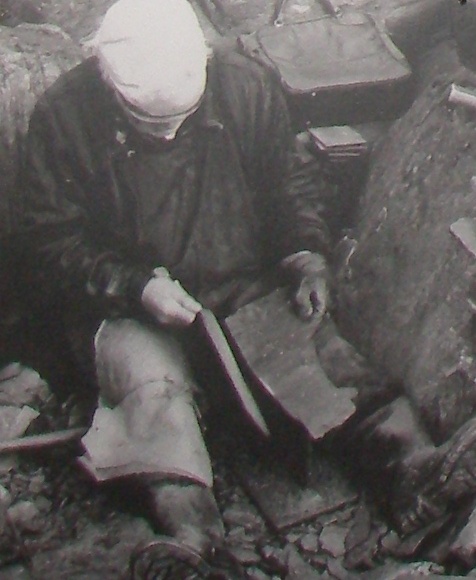 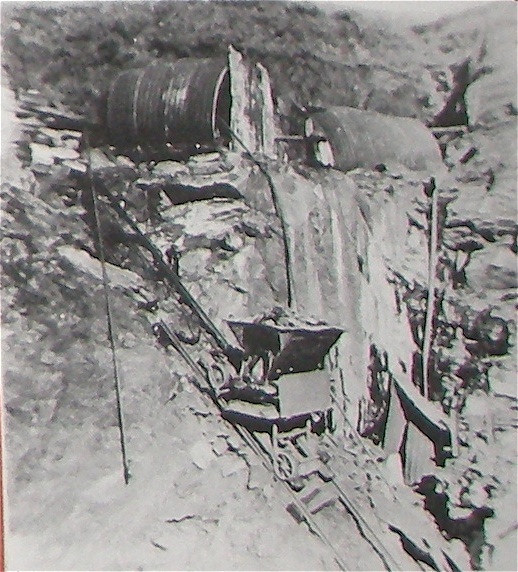 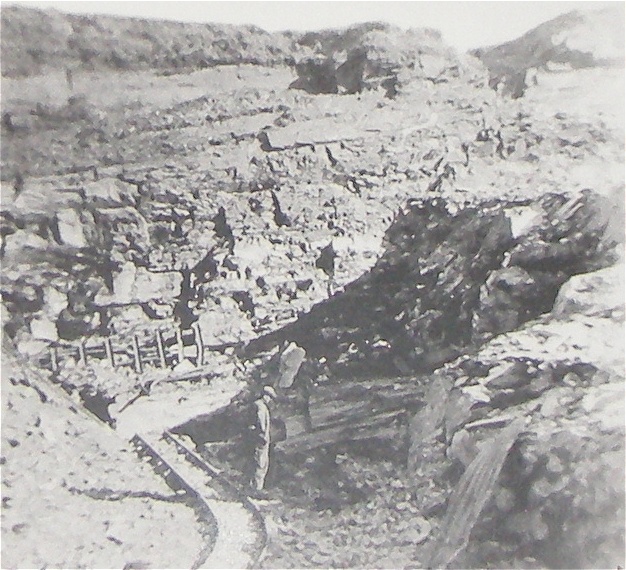 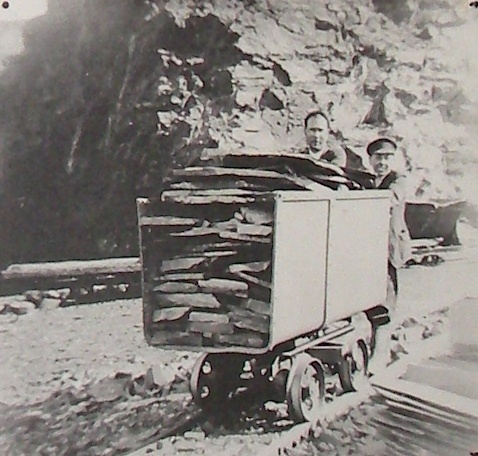