For almost half a century Volunteer Artillery protected the Slate Islands. There were two companies: each had fifty part-time soldiers, two massive artillery guns, and a drill hall – one at Ellenabeich and the other on nearby Easdale Island. This is the history of the Easdale Volunteers. It begins in March 1860.

Captain John MacDougall was the first captain-commandant of the Gunners at Easdale.  He had just five months to turn slate quarrymen into soldiers, for Queen Victoria would be in Edinburgh on 7 August 1860 to inspect 21,000 Scottish Volunteers. Both companies from Easdale paraded before their sovereign, their names recorded in a special commemorative booklet. Days later, on 10 August, the Easdale men took charge of the first three of their four 32-pounders. Eight foot in length, each barrel weighed almost three tons. They fired cannonballs out to sea to a range of over a thousand metres.  One cannonball survives to this day.

We know how they trained from detailed records in our archives. In 1879, on a “calm day with a light breeze”, both companies assembled at the gun position on the eastern edge of Easdale Island. Two guns faced south-east.  The target was anchored to the sea bed, fourteen hundred metres away – “a half-ton vat on a frame, floating, with a red flag on top.”  Captain Angus Whyte was in charge.  Each cannon fired in turn; each detachment of men rotated through their various duties, so that every non-commissioned officer and every trained gunner had the chance to aim the cannon and fire it.

They wore artillery uniforms of midnight blue, with scarlet collars and silver badges.  The Austrian Knot – a looped pattern of scarlet braid sewn at the cuff – was the distinctive mark of all Volunteers.  Round pill-box forage caps were preferred at Easdale to the blue cloth helmets that should have replaced them.

Each Artillery Volunteer carried a rifle: a Snider-Enfield carbine.  They kept their carbines at home for there was no central armoury at Easdale.  A rifle range was built in 1887, high in the hills and hidden from view.  The butts survive to this day: two rusting target frames shelter behind the remains of a stone wall and sloping earth bank. They would have held targets made of thick card.  Elsewhere, hidden in the bracken, are great slabs of cast iron, peppered with the scars of bullets fired over a century ago.

In the following year there was a crisis. Captain Whyte had left two years earlier and most of the junior officers had also gone. Second-Lieutenant Duncan Cameron was the only officer remaining.  In June he was given temporary command of both companies.  He must have felt apprehensive: he had been commissioned only four months earlier.

Two challenges faced him.  A devastating storm had destroyed the gun position on the island’s eastern edge some years earlier.  Four new wooden gun-platforms had to be built on the south-western shore, facing out to the open sea. They were not yet complete. The second, more exciting challenge was to prepare to receive new guns.  Soon the old smooth-bore cannon would be replaced by new, more powerful artillery.

In early 1891 they arrived: 64-pounder, 58-hundredweight, rifled, muzzle loading guns.  They were of the same size and calibre as the old cannon; but they could fire heavier, spinning shells twice as far as cannonballs.  They were mounted on carriages of oak and teak with cast iron wheels.  Two of these gun carriages survive on Easdale Island.

A new commanding officer arrived later that year, to Duncan Cameron’s relief.  Captain Matthew Wilson would command them for the next eleven years.  He trained them meticulously. They won the prestigious King’s Cup in 1903 at the Scottish National Artillery Association competition.  Wilson even wrote a pocket manual, which survives in our archives.  It is concise and clear.  It tells the volunteer soldier everything he needed to know about gunnery.

At the start of the twentieth century the British Army was struggling in the Boer War, needing reinforcements of infantry – not artillery. But Easdale’s commanding officer did deploy to South Africa.  Captain Patrick Gillies was the local doctor and his medical skills were required.  He volunteered for the newly-formed Royal Army Medical Corps and in 1901 took charge of a military hospital in the Natal province.

The Artillery Volunteers never fired their guns in anger.  The threatened invasion never came.  In 1908 the old Volunteer Force gave way to a new Territorial Force – today’s Territorial Army.  On Tuesday 31 March the Easdale Gunners stood down.  On Wednesday H Company formed at Easdale, a Territorial sub-unit of 8th Argyll and Sutherland Highlanders.  Gunners became infantrymen, and Patrick Gillies became their commander.  They served in the First World War, the Argylls in France and Captain Gillies at Gallipoli as a military doctor.

Meanwhile the old 64-pounders remained on Easdale Island.  For another three decades they stood silently, like sentinels, looking out across the Firth of Lorne.  Then, during the Second World War, the guns were taken away on Government orders as scrap metal, much to everyone’s dismay.  As one former islander recalled, “in most of the country it was garden railings and gates which were taken, but Easdale was a bit short of these.” 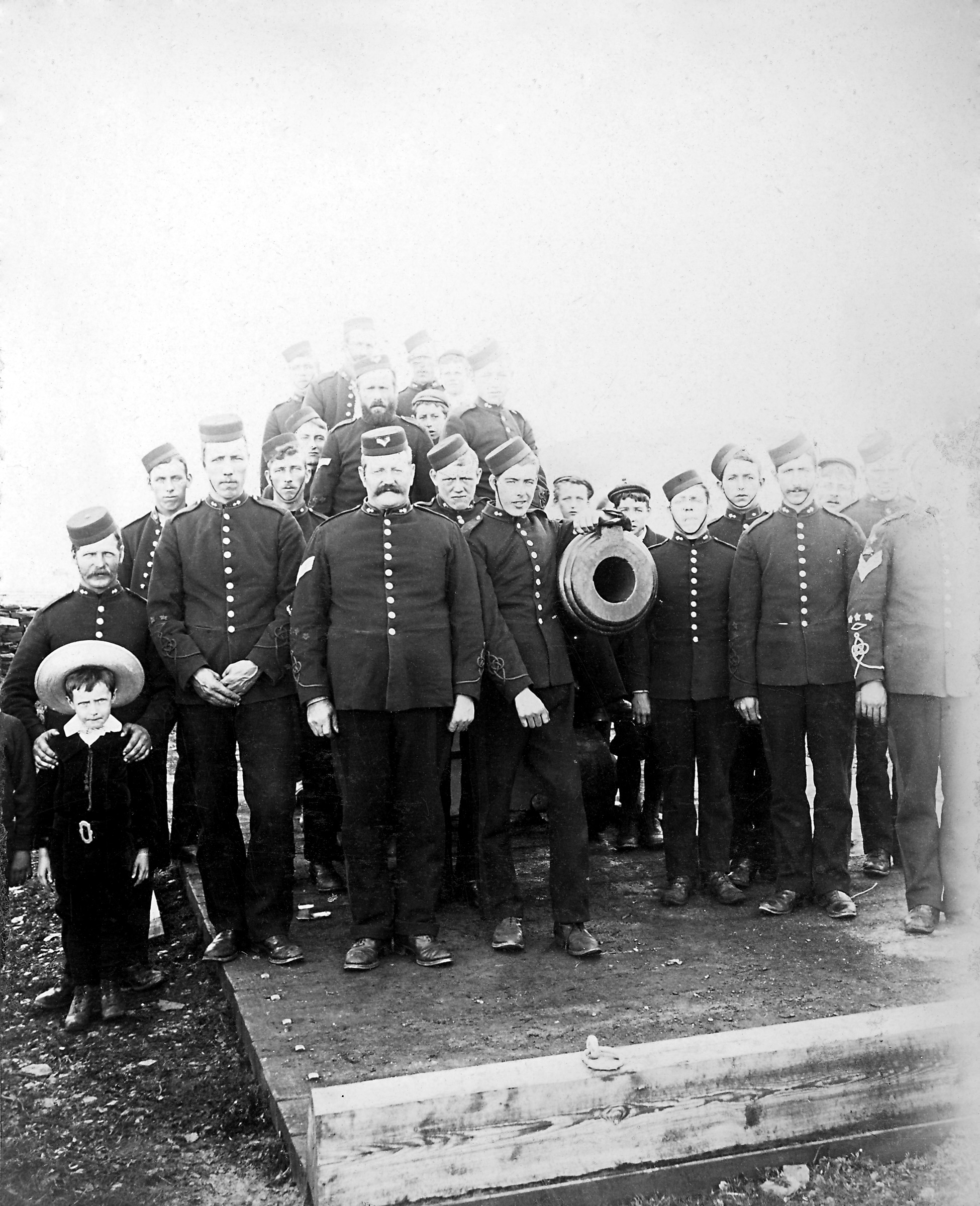