In early August 1860 one hundred and five men travelled from Easdale to Edinburgh to take part in the first Royal Review. The railway had not yet been built as far as Oban, so their journey would have been tedious.

The nation’s Volunteer Force was barely one year old but Queen Victoria wished to inspect her new soldiers, first in Hyde Park in June, and then on 7 August in Holyrood Park.  Rising high above Edinburgh’s royal palace, Arthur’s Seat and Salisbury Crags provided a natural amphitheatre for the city’s population to witness this special event. Between two and three hundred thousand spectators, occupying every vantage point, watched the Scottish Volunteers parade before their sovereign.

It was a hot and dusty afternoon. The Volunteers marched into Holyrood Park and formed up, facing a saluting dais and huge grandstand draped with Royal Stewart tartan. All artillery companies paraded together.  In the fifth column from the right, closest to St Margaret’s Loch, stood the Easdale Volunteers.  Both companies were present, commanded by Captains John MacDougall and Alex Pitcairn – one hundred and five men whose names are recorded in a commemorative programme.

There were over twenty-one thousand soldiers on parade.  It took some hours for them all to assemble and by 3 o’clock, when the parade was due to begin, they were still forming up.  When news reached Holyrood Palace that all was ready, the Royal Procession began.  The Queen wore a pale lilac silk dress, a green silk bonnet with green feathers, and a Stewart tartan shawl. Her carriage drove along the entire length of the parade before moving to the saluting dais.  Now the march-past could begin.  It took an hour and forty minutes. Clouds of dust soon begrimed all uniforms and stung the eyes of spectators.

Once the march-past was completed, twenty-one thousand soldiers advanced fifteen paces, halted and gave the Royal Salute. An unnerving silence followed.  Then a thunderous three cheers erupted from the parade, which was echoed and amplified by the crowds on the hills. The effect was so deafening that horses panicked and the senior officers riding them struggled to remain in their saddles.

By 6 o’clock the parade was over, but it took until nightfall for Arthur’s Seat to be clear of spectators. It was a scramble in the railway stations as thousands of soldiers began weary journeys home.  Some Volunteer companies remained in Edinburgh for a few days, but the Easdale men did not have that luxury. They had to return to the west coast of Argyll in time to receive the first three of their 32-pounder cannons.

The Queen’s delight at the Review did much to strengthen the morale of the Volunteer Force. It also placated the Generals, innately suspicious of these new part-time soldiers. 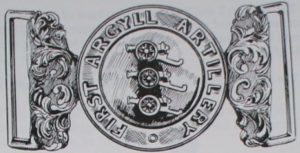