Two artillery companies were created at Easdale on 7 March 1860 – the first in Argyll. Captain John MacDougall was an inspired choice to command Number 1 Company.  He had been a Captain in the Royal Navy – a far more exalted rank than the Army captain he now became.  He had served at sea for twenty-six years and had seen action with the 32-pounder naval cannon now being issued to Britain’s volunteer artillery.  No one was better qualified than John MacDougall to teach gunnery to Easdale’s new Volunteers.

Captain Alex Pitcairn, Factor to the Marquis of Breadalbane, took command of Number 2 Company.  But it was MacDougall, the senior of the two captains, who was the captain-commandant – Easdale’s first commanding officer.  They recruited over a hundred men from the ranks of the local slate quarrymen, and appointed four junior officers and eight sergeants.

Those early weeks and months would have been devoted to foot drill, in preparation for the Royal Review of Scottish Volunteers in Edinburgh; and to the purchase and fitting of uniforms.  Within three years the pattern of uniforms would be standardized throughout the volunteer artillery, but in 1860 it was left to each company to choose its own. We have no way of knowing what the Easdale men wore when they paraded before Queen Victoria on 7 August 1860, but one eye witness recorded that “among the Artillery, as might be expected, blue was the favourite hue.”

The first three of their four 32-pounders arrived by sea from the headquarters at Leith Fort on 10 August.  They bore the maker’s marks of Carron 1826 and the Royal Cypher of King George IV.  They may have been old cannon, no longer needed by the Royal Navy, but they would be used at Easdale for the next thirty years. These smooth-bore guns fired cannonballs of 32 pounds weight (14 kg) and 6 inches diameter (15 cm).  The Volunteers learned to use them on land for coastal defence.

At Easdale they fired at a floating target, anchored in the shallows, typically fourteen hundred metres away.  The gun layer aimed carefully at the target, but it was the observer – normally the captain in command – who had to find the correct range. He stood well to the flank where he had a better view of the fall of shot, and ordered adjustments to the range until the cannonball landed close enough.

Meanwhile drill halls were built.  The hall at Ellenabeich had a specially strengthened floor so that gun drill could be practised indoors. This old hall remained in use by the local community until 2007, when it was demolished and a new hall built within a few metres of the old site.  Easdale Island had its own drill hall, which was opened in May 1870. 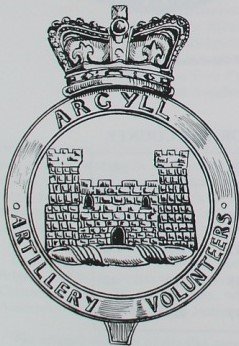